Graduation day is a somber and painful time in Beslan. While across Russia school children celebrate one of life's major milestones by bringing flowers to school for their teachers, in this small community, entire classrooms head for a separate section of the town's cemetery.

Known as the City Of Angels, this sprawling plot of land is where most of the 333 people who died in Russia's worst ever terrorist attack, the Beslan school massacre, were laid to rest. More than half were children and every second headstone is adorned with toys.

Graduates gather silently around the tombs of their former classmates killed on what should have been the last school day of their life. White balloons, one for each missing graduate, are released into the sky. Last year sixteen children slain in the terrorist attack would have finished school. This year 13 balloons drifted above the tombs.

Even late at night, the cemetery is rarely without visitors. Like Milana Adirkhayeva, most relatives go there to speak to their dead. The nine year old and her elder sister Emilia survived the school siege. Their mother, 27 year-old Irina, died of gunshot wounds. Milana was only four then but the image of her mother stroking her head as their life hung in the balance during the hostage drama is forever etched in her memory. 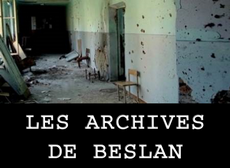